A new way of viewing and navigating a hierarchy has been introduced to make it easier to review a number of nodes within a level together. A summary of new behavior is described below.

The first change is that the Company level will persist in all hierarchies. Users will no longer be able to select the company level within the hierarchy.

This was required in order to provide the ability to show all nodes in a level within the statistics grid as described below.

2. Selecting a level displays all nodes within the level

This is a significant new feature that allows users to view all the nodes within a level at once. Please note that this is only applicable to the statistics grids. Units grids, revenue grids, and others are only displayed in context.

In the image below, I have chosen the customer level to view and see all the nodes with the customer level. As noted, though I have a units grid in the page and tab below, it is not visible. If I wish to view the detail of a node within a level. I can click on the Action Menu icon or simply select a node.

By selecting the node within the level, I now see the levels child statistics and units grid since the hierarchy is now in context. 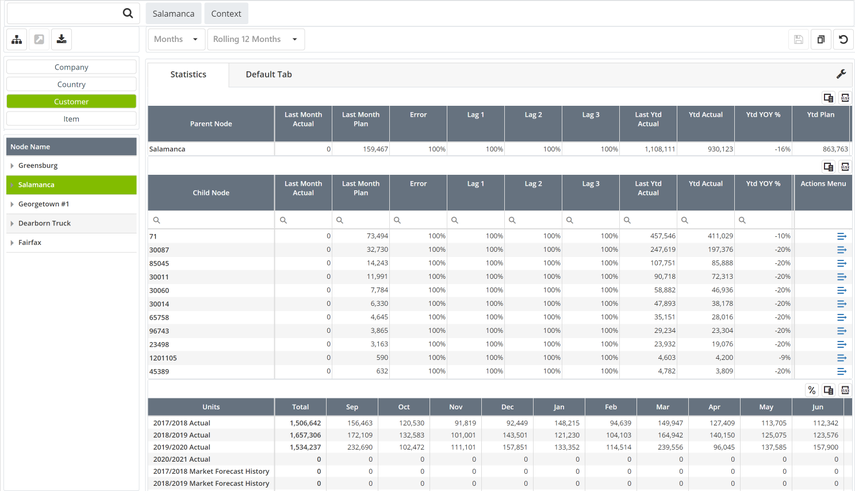 Please note that with the addition of the company level, a new forecast needs to be run to re-populate the forecast statistics.

The plan row is now fixed. We made this update since edits can not be made without the plan row. Since it is required we removed the capability for users to hide the plan row.

If the plan line is not in the correct location following the release, please delete the grid and create a new grid in its place.

An update has been made to bring the same behavior of editing event plan values by percent to demand planning.

We continue to add more information to help customers understand issues with any of their Advanced Planning uploads.

The structure of the table is described in the data table section Transfer Orders (transferorders.txt).

This feature is currently limited in its availability. If interested, please contact support to enable the feature in your account. For reference, the feature name is "SoftTransitionLinkCalculateBasedOnSourceStockout."

In this example, the source transitions to the new items during the week of January 3rd.

In one of the destination locations, the transition does not occur until 2 weeks later - January 17. It transitions later because there is a 2 week transit time from source to destination.